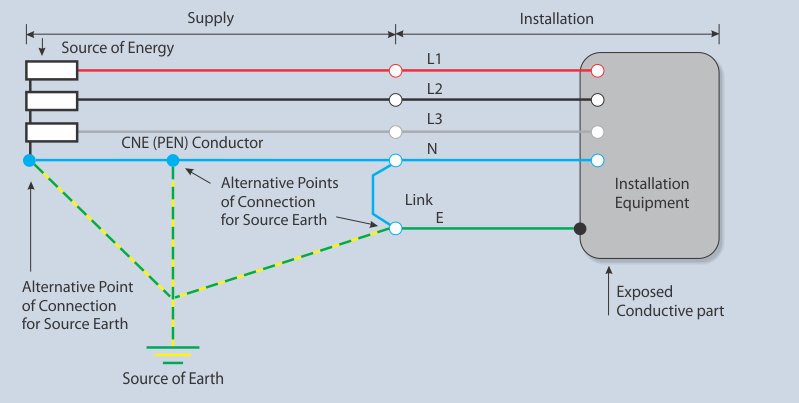 Types of Earthing Systems – What does TT, IT & TN Earthing mean?

Over the past century, Electrical Safety Standards have evolved into highly developed systems that cover all the major aspects for a safe installation, including Earthing Systems. In Low-voltage (LV) Electrical Installations, the reference standard IEC 60364 is used for the measures to be implemented to guarantee the protection of personnel and property.

This standard has defined three types of Earthing Systems, namely TT, IT, and TN systems. Since IEC publishes International Standards for all electrical, electronic, and related technologies and is the leading international organization in its field, IEC 60364 is the apex level document that informs the standards for LV Electrical Installations around the world. Therefore, the three types of earthing systems defined in IEC 60364 are also recognised in many national standards. BS 7671: 2008, also known as the IEE Wiring Regulations 17th Edition is the British Standard published on January 2008 used by the UK and other countries. Similarly, Indian Standard IS 732:1989 (R2015) is used in India for electrical installations.

As mentioned above, the three major types of Earthing Systems used by IEC 60364 are

The TN system is further subdivided into TN-C, TN-S and TN-C-S and thus we will refer to 5 types of Earthing Systems prevalent worldwide.

The First Letter of each system refers to the power source from a star-connected winding.

The Second Letter refers to the consuming equipment that needs to be earthed.

From the ‘Handbook of Electrical Engineering: For Practitioners In The Oil, Gas And Petrochemical Industry’ by Alan L. Sheldrake

The most common systems are TT and TN. A few countries, such as Norway, use the IT system. The table below table lists examples of the Earthing Systems used for public distribution (LV Consumers) in a few countries. 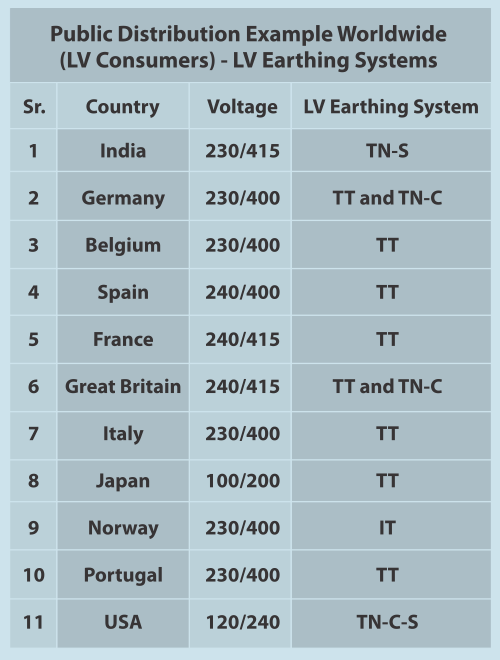 In this type of Earthing System, connection to the supply source is directly connected to earth & load end or installation metalwork is also directly connected to the earth. Therefore, in case of an overhead line, the mass of the earth will be the return path for the line. The neutral and earthing conductor must be separated through the installation because the power distributor only provides the supply neutral or protective conductor for the connection to the consumer.

The distributor system does not have any connections to earth or it has only a high impedance connection. The basic feature of IT earthing system is that in the event of a fault between phases and earth, the system can continue to operate without interruption. Such a fault is referred to as a “first fault”. Thus, usual earthing protection is not effective for this system and this type is not meant for consumer power supply. The IT Earthing System is used for power distribution systems such as substations or generators. 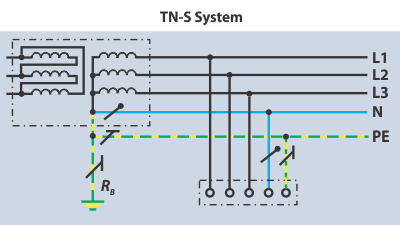 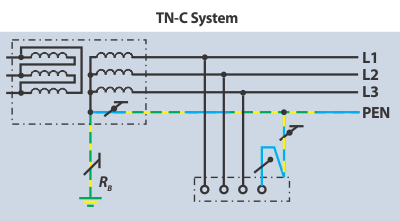 The Neutral and the protective earth are combined in a single conductor in a part of the system. This type of earthing is also known as multiple protective earthing. The supply system PEN conductor is earthed at two or more points and an earth electrode may be necessary at or near the consumer’s installation. All the exposed conductive parts of the installation are connected to the PEN conductor via the main earthing terminal & the neutral terminal and these terminals are linked together.